The pie chart below presents the percentage of new job opportunities for different professional groups in Australia in the year 2001.

Write a report for a university lecturer describing the information shown in the diagrams below.

You should write at least 150 words.

New job openings in Australia in 2001 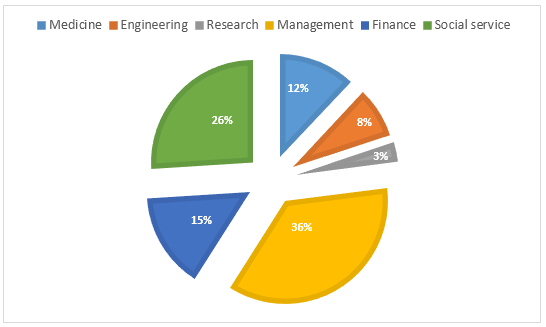 According to the given illustration, 36% of total job opening was in management sector in Australia in 2001 and this ratio of new jobs was higher than any other sectors. Approximately one out of every four jobs were related to social service while around one out of seven jobs were in the finance sector. Furthermore, medicine specialists had 12% jobs to apply to while only 8% and 3% of job announcements were for engineers and researchers respectively in Australia in 2001. It is noticeable that fewer jobs related to research, only 3%, were announced in 2001 in Australia while management and social service jobs comprised the highest ratio, more than 60%, of the new job opening in this year.

According to the given pie chart, 36% fresh jobs were looking for management staffs which covered the highest ratio of new jobs in Australia in 2001. Next to management job openings were social service jobs that accounted for roughly one-quarter of fresh jobs in this year. Finance sector’s job opening accounted for 15% of total job advertisement which was 3% higher than that of medicine specialists’ jobs. Interestingly, engineers had only 8% jobs to apply to and this was significantly lower than that of management and social service job openings. Only three out of one hundred job reporting was for researchers in Australia. It is interesting to notice that specialists like engineers and doctors had significantly fewer jobs to apply in 2001 in Australia.