The line graph below shows the cases of diseases caused by X virus in Australia from 1960 to 1995. 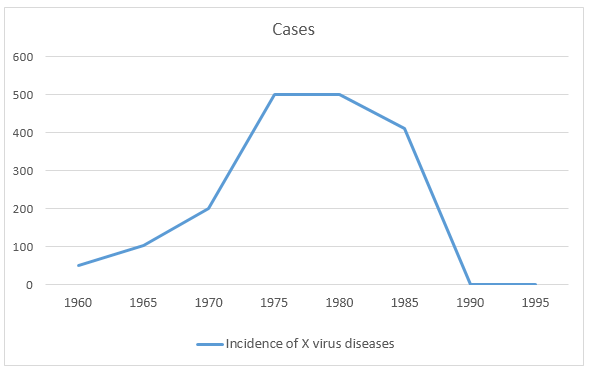 Sample Answer:
The line graph gives data on the X virus diseases reported from 1960 to 1995 in Australia. Overall, the highest number of V virus-related incidents occurred from 1975 to 1080 and after 1990, this virus could not cause any illness in Australia.

As can be seen in the illustration, the number of affected people from the X virus stood at only 50 in 1960 and in the next 10 years, it gradually increased. Two hundred people were infected in 1970 and afterwards, the fatality sharply increased and reached the peak at 500 cases in 1975. This number remained stable over the next half decade and then decreased by 100 in 1985. However, the recorded illness due to this virus in the next 5 years slumped and in 1990 not a single case of X virus disease was found. the last five years, from 1990 to 1995, no one was reported to become sick from the attack of this virus in Australia.

In summary, X virus attacked the highest number of Australian from 1975 to 1080 but during 1990 to the next 5 years, no was reported to get ill by it.