Reading.....
Home > Writting > Task 1 > Academic IELTS Writing task 1 Sample 92 – The diagrams below give information on transport and car use in Edmonton

The diagrams below give information on transport and car use in Edmonton. 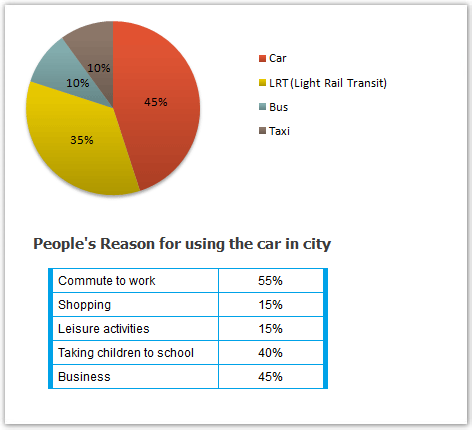 Sample Answer 1:
The given data shows the type and reason of transportation used in Edmonton. According to the given information, the car was the most common transportation type used by the people of Edmond and work & business purpose was the main two reasons they travelled.

As is presented in the pie chart and table, 45% travel was made by cars whereas the light rail transit was used 35%. These two were the highest used transportation types used by the people of Edmonton. Bus and Taxi were both used 10% of the total travel which was much lesser than the use of car and rail transportations. According to the table data, most people travelled to commute to work and the percentage of it was 55. The send highest percentage of people travelled for the business purpose which was 10% less than the work commuting reason. For shopping and leisure activity 15% people travelled and to take children to their school was another reason people travelled which occupies 40% of their total travel.

In conclusion, people of Edmonton travelled mostly for work, business and to reach their children to school and they used mostly cars and rails for that.

Sample Answer 2:
The provided pie chart illustrates four different modes of transportation used by Edmonton citizens and their motivations for using the car in this city.

As is observed from the given diagram, approximately half of the total travellers preferred to go by car. However, the possible reason to travel by car was to go to the job which was 55%, followed by business (45%) and taking children to school (40%). Interestingly, it was least prioritised while they went for shopping and leisure activities using their cars. Besides, 35% of the citizens commuted by Light Rail Transit whereas bus and taxi were equally used by the Edmonton people with 10% both. It is obvious that people in Edmonton city preferred Light Rail Transit over the taxies and buses as the rail commuters well exceeded the bus and taxi users in this city.

Overall, the car was the primary means of transportation for Edmonton citizens and rail was more popular among them than the taxi and bus.

Sample Answer 3:
The pie chart depicts the usage ratio of different types of transportations in Edmonton and the table illustrates the purpose of using cars in the same area. It is clear that car is the most popular while rail is the second most preferred transportation types among the people in Edmonton.

As is seen in the pie chart almost half of the Edmontonians use cars for their transportation while more than one-third of them rely on the Light Rail Transit or LTR. One out of ten of them uses bus while the same proportion of these people takes the taxi for commuting.

From the table, it is evident that the majority of Edmontonian people prefer cars to commute to work, for business needs and taking children to schools. Just over half of the car users travel by car to go to work, while 45% use it for business purposes. People who take their children to school in a car contribute to 40%. On the other hand, only 15% travels by car for shopping and leisure activity.