The line graph below shows the number of annual visits to Australia by overseas residents. The table below gives information on the country of origin where the visitors came from. 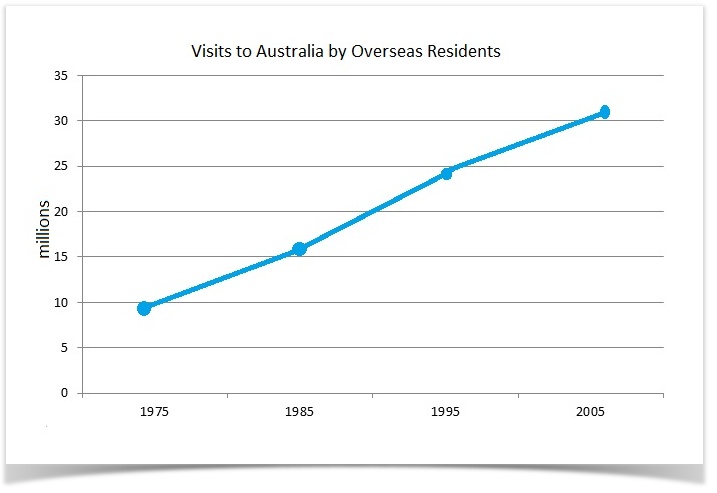 Sample Answer 1:
The provided line graph delineates data on the changes of visitors’ number to Australia from 1975 until 2005 while the table elaborates the percentage of tourists from various countries. At the onset, the number of foreign travellers to Australia had surged ceaselessly during the whole period and tripled by 2005. Moreover, the most substantial growth in the number of foreigners attended Australia had shown by Japan, South Korea and Europe.

The line graph shows that visit to Australia by non-residents had overwhelmingly moved upward over the period of 2 decades: it was nearly 10 million in 1975 and slightly more than 30 million in 2005. Throughout the period, the number of tourists went up as high as 5 million each decade; however, between 1985 and 1995 it boomed to almost 10 million.

While taking into consideration the table data we can easily infer that South Korea, Japan and Europe were leading sources of tourists (2.9, 3.2 and 1.1 million respectively) to Australia. In the wake of 3 decades, those figures almost quadrupled to 9.1, 12. and 4.5 million consecutively. Other countries represented less dramatic increase: China – from 0.3 to 0.8 million, the USA – from 0.4 to 1.1 million and the UK – from 0.9 to 2.9 million. It is worth noticing that the most significant growth in the number of travellers to Australia was from Japan, South Korea and Europe. Australia received the highest number of tourists from these countries during the period.

Sample Answer 3:
The given line graph and table give data on the number of overseas visitors travelling to Australia in millions of people from the year 1975 to 2005 and shows the number of travellers from 6 different parts of the world.

As is presented in the illustration, the number of visitors travelling to Australia raised steadily and the majority of these visitors came from Japan, South Korea and Europe. Almost 10 million people visited Australia in the year 1975 and this amount increased to over 15 million after 10 years. In the year 1995, total visitor travelled Australia was approximately 24 million and finally in 2005 well over 30 million.

The second table gives data on the number of visitors from 6 different regions who came to visit Australia in 2 different years with a 30 years interval. Both in 1975 and in 2005, Australia had the largest number of Japanese tourists followed by South Korea. In 2005, tourists from these 2 countries who came to visit Australia were about 20 million while 4.5 million tourists came from Europe and only 1.1 million from the USA. The least number of tourists came to Australia during this period are from China which was only 0.3 million in 1975 and 0.8 million in 2005. The statistics of the table shows that total tourist visited Australia from 6 different parts of the world increased significantly in 300 years amounting well over 30 million in 12005 compared to the total number of 8.8 million 30 years earlier.

(This model answer can be followed as an example of a very good answer. However, please note that this is just one example out of many possible approaches.)