The graphs below show the types of music albums purchased by people in Britain according to sex and age. 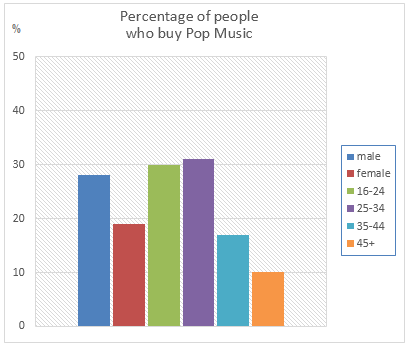 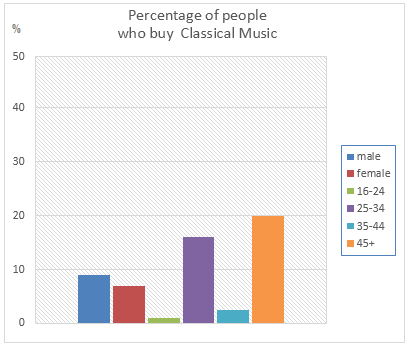 In pop music, buyers from 16-34 years old were well ahead than other age groups. 16-25 years old pop album purchasers stood close to that of 25-34 years old and they combinedly purchased more than 60% pop albums sold in Britain. Almost 28% pop albums were purchased by males while this was less than 20% by females. People over 45 years old were less enthusiastic about pop and rock music while their main interest was classical music. With regards to rock music album purchase, a striking similarity between the purchasing trends of pop and rock music albums could be observed. Nevertheless, rock music was the most popular music genre for both male and female prefered pop music.

On the other, classical music was most preferred by the people who were over 45 years old and they purchased 20% music albums of this music type. However, young Britons were quite less enthusiastic about classical music with their 1-2 percent purchase of the album of this genre. Interestingly, British people from 25-34 age group preferred classical music while British citizens from 35-44 did not.

Sample Answer 2:
The three provided graphs represent data on the type of music albums purchased by the different age groups in Britain. As is observed, Rock is most popular music type among the three music categories and people purchasing classical music album are mostly over 45 years and male listeners purchased more album than that of females.

In all cases, men purchase more music albums than women did. Rock and pop music are more popular among young British while classical among the people over 45 years. The market of rock music albums is mainly dominated by men with a purchase record of over 30% compared to 16% purchase done by women. From the first graph, it is obvious that interest in pop music seems steady among the population who aged from 16 to 44 and after people turn to 45 years, they continue to buy pop type music albums, the ratio decreases nevertheless.

Among the Britons of 16 to 34 years old, the rock music is most revered. Opposite to the classic music graph, the interest in rock music keeps falling after people reach their mid-thirties and a sharp fall after the age 45 is visible.

( This model answer can be followed as an example of a very good answer. However, please note that this is just one example out of many possible approaches.)
Sample Answer 3:
The charts present data on pop, rock and classical music album purchase by different age groups of British male and female. It is worth noticing that rock music is more popular among the young people while classical music is preferred by the Britons over 45 years old.