The graph below shows the number of vehicles owned by per thousand people in China from 1987 to 1999.

Number of vehicles per thousand people in China 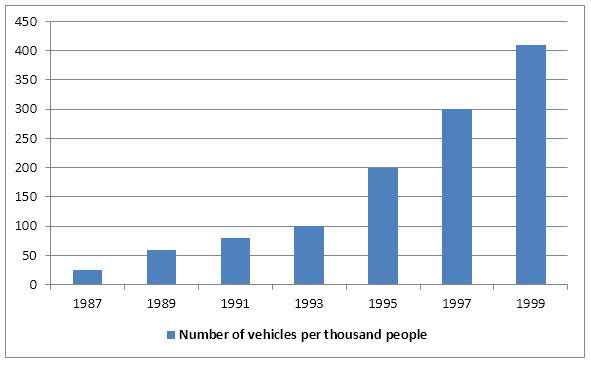 Sample Answer 1:
A glance at the graph reveals some striking information about how many cars per thousand people in China owned in a period of twelve years. Overall, it can be seen that over the period, the car ownership in China increases remarkably.

In 1987 every forty Chinese on an average had a car and only in two years, every twenty persons owned a vehicle in China. The vehicle ownership kept on increasing and in 1993 each ten Chinese on an average owned a car. After that, the car ownership ratio in China upsurged and just in the next two years the vehicle number in China doubled. In the final four years, from 1995 to 1999, the total vehicle number in China rose overwhelmingly and in 1999 there were more than 400 vehicles in China for every thousand population.

Sample Answer 2:
The bar graph illustrates how many vehicles are owned by every thousand people in China over a 12-year period. Overall, it is clearly shown that there was a rapidly increasing trend in the ratio of vehicle ownership in China from 1987 to 1999.