The graph and table below give information about water use worldwide and water consumption in two different countries. 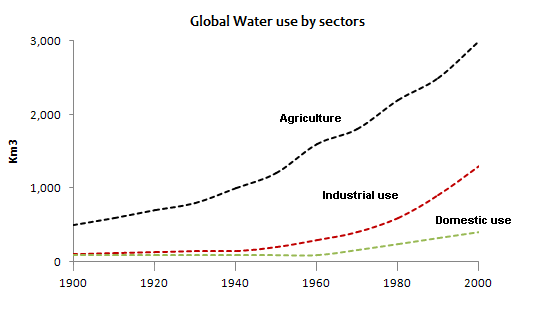 Sample Answer 1:
The graph shows how the amount of water used worldwide changed between 1900 and 2000 and water consumptions of two countries compared to their population.

Throughout the century, the largest quantity of water was used for agricultural Purposes, and this increased dramatically from about 500 km³ to around 3,000 km³ in the year 2000. Water used in the industrial and domestic sectors also increased, but consumption was minimal until mid-century. From 1950 onwards, industrial use grew steadily to just over 1,000 km³, while domestic use rose more slowly to only 300 km³, both far below the levels of consumption by agriculture.

The table illustrates the differences in agriculture consumption in some areas of the world by contrasting the amount of irrigated land in Brazil (26,500 km³) with that in the D.R.C. (100 km²). This means that a huge amount of water is used in agriculture in Brazil, and this is reflected in the figures for water consumption per person: 359 m³ compared with only 8 m³ in the Congo. With a population of 176 million, the figures for Brazil indicate how high agriculture water consumption can be in some countries.

Sample Answer 2:
The given graph shows the water consumption in different sectors and how water usage changes rapidly from 1900 to 2000. It also compares the consumption of water in the agriculture sector in two different countries according to their population.

Throughout the century, the highest water consumption could be observed in agricultural sector respectively which was initially 500 km³ and rose steadily approximately to 3000 km³ respectively. Usage of water recorded at a minimal level in 1900 and it remained same in half of the century. In 1950 and onwards, water consumption in industrial sector grew significantly to over 1000 km³ while in domestic sector slightly increment in water usages can be seen which was about only 300 km³.

Sample Answer 3:
The line graph and table demonstrate the trends of the global water use in three different sectors from 1900 to 2000 and compares the water usage in Congo and Brazil in 2001. There was an overall upward trend in water use in these three sectors over this period. Water consumption in Brazil was much higher than that of Congo.

Consuming water in agriculture, industrial and domestic fields all increased dramatically during this time. The figures for agriculture show the most significant changes of all. Between 1900 and 1950 its quantity rose to around 1,000 km3 and then there was a sudden rise of 2,000 km3 in 2000. The patterns of industrial and domestic water consumption were very similar to each other. Starting at almost 100 and 50 km3 respectively in 1900 and had remained nearly constant until 1950. After that, the former jumped noticeably to around 110 km3 in 2000. Likewise, the later saw a significant peak, rising by nearly 5 times (from approximately 50 to 250 km3) at the same time.

It is clearly seen from the table that the water consumption in Brazil, which had 176 million people, was significantly higher than that of Congo in spite of lower population in Congo (5.2 million), which had 265 times as less space as Brazil had.