The chart below shows the numbers of male and female research students studying six science-related subjects at a UK university in 2009. 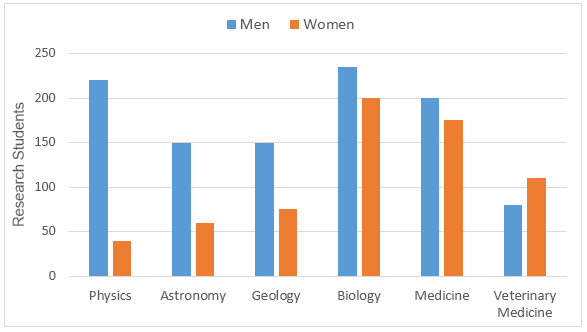 As is obvious from the given illustration, physics, astronomy and geology were mostly picked by the male research pupils while veterinary medicine as a subject was mostly preferred by females. While more than 200 male took physics, only about 40 female did so and a similar trend could be observed in the case of astronomy and geology. The highest number of students took biology as the number of students in this subject exceeded 400. Medicine was the second preferred subjects by the students of this university with exactly 200 male and about 175 female students. The only subject which got more female students than male was veterinary medicine in which more than 100 female enrolled compared to the just about 90 male students. The number of male research students in this UK university was approximately one thousand while it was about 550 for female.