The chart below shows the different levels of post-school qualifications in Australia and the proportion of men and women who held them in 1999. 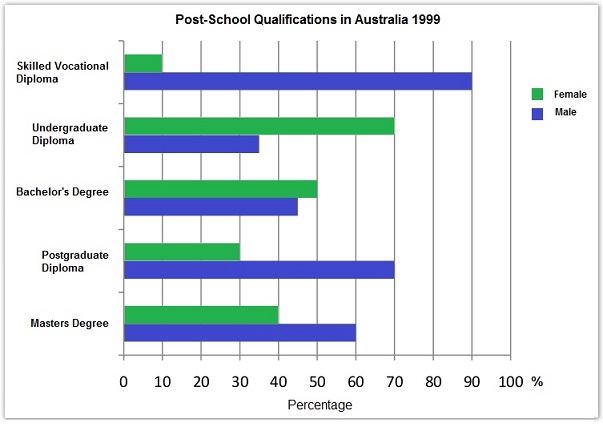 Sample Answer 1:
The given illustration depicts the post-graduation qualification of Australian male and female in 1999. As is observed, female were more in numbers in case of undergraduate diploma and bachelor degree while male outnumbered female in all other levels.

In this chart, almost 90% of males are having the skilled vocational diploma, while only approximately 10% of females are having the same qualifications. In contrast, nearly 70% of women obtain the qualifications of undergraduate diploma, which the number is twice larger than the number of males. However, the percentages of females and males who graduate from universities are similar, which are around 55% and 45%, respectively. After getting a degree or diploma in the universities or colleges, it seems that males prefer to keep enhancing their knowledge or skills in schools. The chart also indicates that no matter postgraduate diploma or master’s degree, more males are likely to study for. Near 70% of males are holding the postgraduate diploma and 60% men graduated from graduate programs. For females, only 30% have already studied for obtaining the qualification of a Postgraduate Diploma. For the master’s degree, 40% of women already hold the qualifications.

Sample Answer 2:
The given bar graph compares the male and female post-school degree qualified persons in Australia for the year 1999. As is presented in the graph, more male achieved their post-school degrees in skilled Vocational Diploma, Masters Degree, Postgraduate Diploma than female while more female achieved Undergraduate Diploma and Bachelor Degree than their male counterpart.

Sample Answer 3:
The bar chart compares data of five different levels of educational attainment among men and women living in Australia in the year 1999. Overall, what stands out from the graph is that three out of five levels of post-graduate education were mostly attended by men namely; post-graduate diploma, skilled vocational diploma and masters degree.

As can be seen from the given data, on the other hand, those who had post-graduate diploma were dominated by women with figures of 70% which doubled the number of men in that category. Moreover, half of those who finished bachelor’s degree were also females with just over 5 % ahead of males. Another highlight of the graph is that there was a remarkable number of men,90%, who took up skilled vocational diploma course which left women to only just a tenth.

As a whole, it is clear in the graph that there was an average of nearly half of the Australian men and women population, held a certain post-school qualification in the period in question.