The graph below shows the changes in the maximum number of Asian elephants between 1994 and 2007. 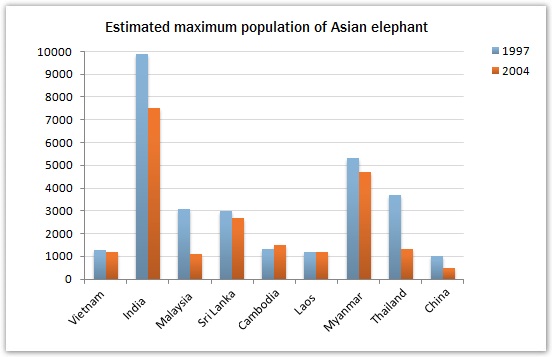 According to the graph, elephants in most of the countries in the list fell in 2004 than that of earlier 1997. This was more prevalent in Malaysia and Thailand where the number of this species dropped to less than half the figure in 1997. In the former, the number of elephants fell as low as 1000.

India remained the country with by far the largest elephant population but experienced a dramatic decline in the number of elephants in seven years. China had the least number of elephants which was a thousand only and this decreased to half of that in seven years. Although the trend was downwards overall, the elephant population in Laos and Vietnam remained almost the same, just over a thousand. The only country where elephant’s population actually grew was Cambodia, where the number increased by 200.

As is presented in the bar graph, approximately 10 thousand elephants lived in India in 1997 which was the highest among the given countries. Myanmar is the second largest country for elephants’ dwelling. Vietnam, Cambodia, Laos and China had about 1000 elephants in 1997 while Malaysia, Sri Lanka and Thailand had roughly 3000 elephants. The least number of elephants were in China in 1997.

In summary, India, Myanmar and Thailand had the largest number of elephant among the given countries and except in Cambodia and Laos, elephants presence decreased only in 7 years which is alarming for the existence of this species.

Model Answer 3:
The diagram outlines the population distribution of elephants in nine Asian countries in 1997 and 2004. Generally speaking, India had the highest number of elephants in both years while the total number of this species harshly declined during the period.

As is presented, roughly 10000 elephants inhabited in India, the highest, which dropped to nearly 7500 in just seven years. Myanmar had the second largest number of elephants, over 5000, while China had only 1000 elephants in 1997. Their number in both countries declined and only 500 elephants were recorded in China in 2004.