The table below gives information about online activities of people in different age groups. 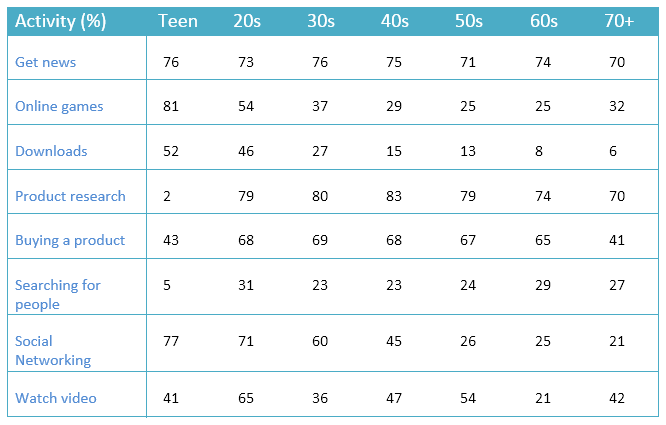 Model Answer 1:
The table data provides information about what people from different age groups do when they are online. Overall, the online actions of people vary greatly based on their age groups and getting online news is the most common online activity of people regardless of their age.

As can be seen from the given data, teenagers mostly play online games, do social networking, get news online, download different contents, purchase products and watch videos. 81% of teenagers’ activity involves playing online video games while getting news and social networking are their second and third most preferred online activities. Teenagers hardly do product research (2% only) or search others. Among the people who are over 19 years old and are younger than 40 years old, getting digital news, researching products, social networking and purchasing products are quite common. On the contrary, people over 39 years old and younger than 60 years old mostly like to get online news, research products, and purchase products. Downloading digital content is not popular among the people of this age group. It is interesting that getting online news is a very popular activity among the people of all age groups while downloading is popular among the teenagers only. Older people mostly like to get news, do product research and scarcely download. It is quite obvious that people in their twenties like to watch online videos more than the netizens of other age groups. Finally, social networking is popular among the younger internet users.

Model Answer 2:
The table gives information on the online activities of people based on their age groups. Comparing those activities, it can be said that getting news is the most popular online activity among the internet users of all ages.

Getting back to details, at least 70% people in all age groups use the Internet to get news and it goes to as high as 76% in teenage groups. While slightly more than 80% teenagers play online games, it drops to over 50% of people in their twenties and 37% when they are in their thirties. Interestingly people over 70 years old like online games more than the people between 40 and 60 do. Digital content download activity is mostly popular among the younger citizens and it drops with the increase of people’s ages. For instance, teenagers’ download accounts for 52% while this drops as low as 6% when people are over 70 years old. Online product research shows a reverse trend and seems like more popular among the adults than the younger people. Adults more or less do 70 to 83 percent online research while this is only 2% among teens. Buying online is equally popular among all internet users and this activity ranges from 43% (the lowest) among teens to 69% (the highest) among people in thirties. Searching for people does not seem like a very popular activity as only 5% teenager do it while the adults’ portion of this activity ranges from 23 to 31 percent. Social networking is more popular among the younger netizens while less common among the aged population. Finally, watching online videos is more popular among the people in their twenties and fifties.